You are here: Home / News / The public concerned by the condition of the ancient settlement Talgar

To Mechtild Rössler
Director of the Division for Heritage and the UNESCO World Heritage Centre
M.Rossler@unesco.org

Ecological Society «Green Salvation» (hereafter referred to as ES (i)), concerned by the condition of one of the World Heritage Sites – Talgar ancient settlement (Silk Roads: the Routes Network of Chang’an-Tianshan Corridor [China, Kazakhstan, Kyrgyzstan, Ref: 1442 ] (ii)), has to inform you about a failure in meeting the site’s preservation and maintenance regulations (iii).

Serious public concern is caused by a lack of access to full and trustworthy information about measures undertaken by state authorities in order to preserve the site, about factors threatening to its integrity, and also by the quality of the provided official information.

1. According to the 2015 Report about condition of preservation of monuments (hereafter referred to as the Report) provided by the Ministry of Culture and Sports of the Republic of Kazakhstan to the World Heritage Committee on January 15, 2016 (iv), the historical and architectural master plan and conceptual scheme map of the area were not prepared to the moment of the Report publication.

2. Satellite image attached to the indicated Report (v) contains outdated information (from approximately spring 2014) and does not reflect the real state of affaires appeared towards the end of 2015. From the west side of the settlement, a bridge over Talgar river was built. It is not on the satellite image. The bridge was supposed to connect two segments of the road leading towards a sports complex. The road was planned to be built through the ancient settlement (see the photo No.01 in the Attachment). At the present moment, the construction is stopped, in particular, because of public protests.

3. According to the information published on the Convention website, Kazakhstan’s state organs do not inform the Committee regarding “information on any threat or damage to or loss of Outstanding Universal Value, integrity and/or authenticity for which the property was inscribed on the World Heritage List” (vi).

As follows from the Report (vii), in 2015, even the local population was not informed about the boundaries of the World Heritage Site.

5. The informational display about the World Heritage Site located at the border of the ancient settlement does not contain information about the fact that the nomination is held together with the People’s Republic of China and Kyrgyz Republic. It is not indicated that the site is protected by the state. The informational display contains multiple grammatical errors in Russian (see the photo No.03, 04 in the Attachment).

6. As for February 26, 2016, the information about inclusion of Talgar site of ancient settlement into the World Heritage List is not published on the website of the National Commission of the Republic of Kazakhstan for UNESCO and ISESCO (after more than a year and a half) (viii).

7. Because of the failure to provide information to the public and to our organization, the ES had to address a court on September 19, 2015, with a demand: «To oblige the Ministry to provide the ES «Green Salvation» with the earlier requested documents, in particular, architectural master plan and conceptual scheme map of the area, which must include protection zone of the site of historical and cultural heritage and specified the location of the monuments of history and culture and newly discovered objects of historical and cultural heritage.»

On November 13, 2015, the court refused the ES to satisfy the lawsuit.

On March 2, 2016, the Appeal Board of the Astana City Court denied the ES in satisfying the appeal.

«All properties inscribed on the World Heritage List must have adequate long-term legislative, regulatory, institutional and/or traditional protection and management to ensure their safeguarding. This protection should include adequately delineated boundaries. Similarly States Parties should demonstrate adequate protection at the national, regional, municipal, and/or traditional level for the nominated property. They should append appropriate texts to the nomination with a clear explanation of the way this protection operates to protect the property» (ix).

As a result of monitoring of the ancient settlement Talgar, performed by our organization (last visit on-site took place on February 25, 2016), the following facts were determined:

– most of the ancient settlement is fenced, but there is no fence on the north side of it, and the access to the ancient settlement is open to anybody (we found no guard on duty);
– informational display with a description of the monument indicating its status is placed only in one spot;
– access to the territory of the monument is not closed which creates a threat of its destruction.

Integrity of the site is damaged

As a result of the monitoring of the ancient settlement Talgar, performed by our organization (last visit on-site took place on February 25, 2016), the following facts were determined:
– part of the ancient settlement wall was destroyed in two spots from the northeast side of the settlement, as a result of archeological bore pits, as indicated in the material provided by the Ministry of Culture and Sports (x) (see the photo No.012 in the Attachment);
– apparently, the local residents continue to destroy the ancient city wall by digging out clay from the bore pits, which confirms unsatisfactory protection of the site (see the photo No.05, 06 in the Attachment);
– on the place of the partially demolished by restorers and archeologists ancient city wall and tower, a tower and part of the fortress wall were built using modern construction materials (see the photo No.07, 08 in the Attachment), which lead to a “significant loss of historical authenticity” of this part of the archeological site (xi);
– official sources do not provide information whether or not the Convention Committee was informed about this construction (in accordance with the point 172 of the Operational Guidelines) (xii).

As a result of the monitoring of the ancient settlement Talgar, performed by our organization (last visit on-site took place on February 25, 2016), the following facts were determined:
– the territory of the ancient settlement is littered, judging by how it looks, the trash lays there since the fall 2015 (see the photo No.09, 10 in the Attachment);
– new trash appeared along the fence of the site (see the photo No.11 in the Attachment). 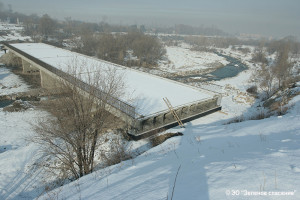 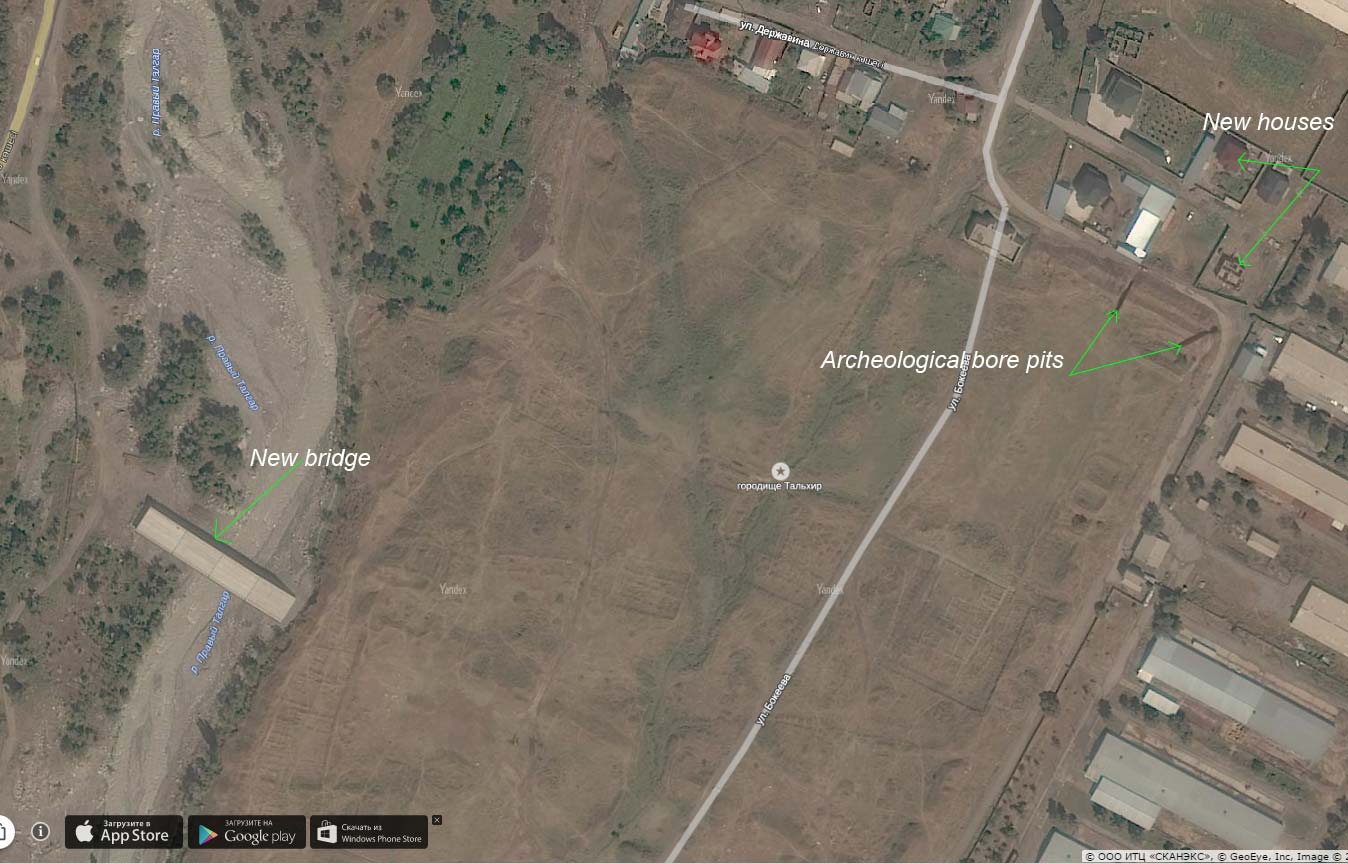 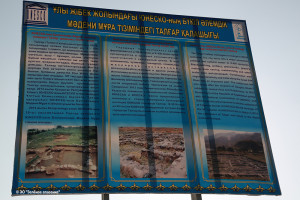 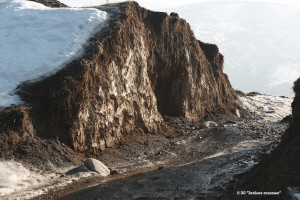 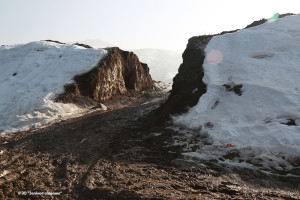 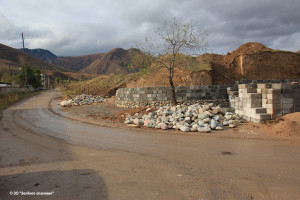 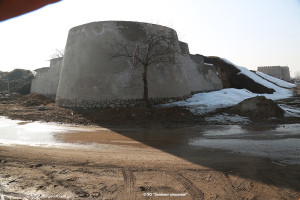 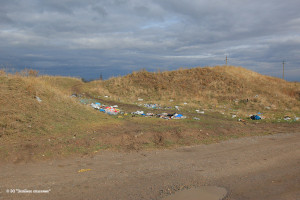 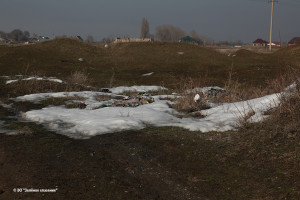 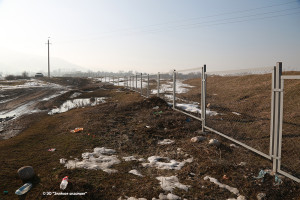 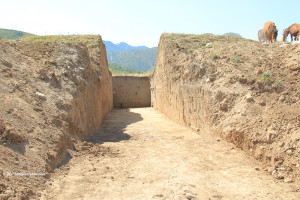 Results of 2018 monitoring of the Talgar World Heritage Site

Absurd around the Talgar site continues