You are here: Home / Education 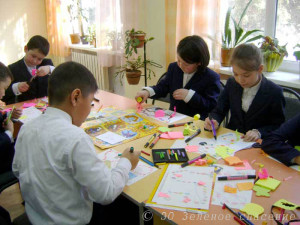 Fostering environmental awareness and education are among the priorities of Green Salvation.

Since 1995, the organization has published the Green Salvation Herald, with a supplement in English, since 2000. The Bulletin’s thematic issues are related to environmental protection legislation and the protection of human rights, environmental education, the development of a network of national parks, and other socio-ecological problems. Special courses are developed and textbooks are published for students. To date, more than 25 publications have been produced in Russian, Kazakh and English.

During 1996-2001, an ecological summer school organized together with the ecological club “Berendey” took place on the territory of a national natural park, along with that, a children’s club “Muraveinik” (“Anthill”) was conducted for several years under a patronage of the State Children’s Library.

Green Salvation collaborates with the domestic and foreign press, participates in television and radio programs, and organizes exhibitions.

In 2002, Green Salvation began a video program. The films include: “Legacy of the Nuclear Age”, “The Riches of Nature—In Whose Hands?”, “Passengers in Forgotten Way Stations”, “Canyon” and “The Earth Does Not Belong to Man…”. Several of these films have been awarded prizes at international festivals.

In 2002, Green Salvation launched a website in Russian and English. On the Russian version of the web-site, you can find information about educational activity held by Green Salvation, collaborative ecological clubs, and teachers, activists of the ecological movement.

“Education” section of the web-site consists of several sub-sections.

First sub-section “Methodology” contains description of educational methods and programs developed by middle school teachers Golubkova L.A, Pfaf T.R., Melnikova E.V., and Zatoka E.N. These materials were prepared during the period of 2000-2009. Authors from the ex-Soviet countries, committed environmentalists, share their discoveries and findings in their work.

Green Salvation experience in ecological pedagogy is represented in methodological recommendations for special courses “Following pages of the Red Book of Kazakhstan: trip with a camera”. This is a co-joint project of a Green Salvation member Berkova N.N., elementary school teacher Mussikhina E.V., and a scientist Zhdanko A.B.

“Children’s works”. Here you will find compositions, poems, and drawings created by children who attend the clubs, who are fascinated by studying the nature, observing its changes and conditions.