You are here: Home / News / THE RADIOACTIVE TRAIL WILL LAST FOR GENERATIONS

Maksim Shingarkin is the coordinator of Greenpeace Russia’s antinuclear project. He is a dismissed staff officer, having served for ten years in the Twelfth Department of the Ministry of Defense, responsible for nuclear weapons testing, including at the Semipalatinsk test site in Kazakhstan. 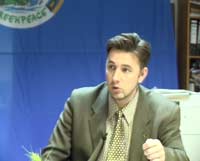 Question: How do you rate the international experience in dealing with radioactive waste?

Answer. Radioactive wastes fall into two categories. The first are ores, formed during production, and the second are connected with the use of radioactive materials in the nuclear industry. For example, at nuclear power stations, wastes with artificial isotopes are produced

There is a basic difference between artificial and natural radioisotopes. The mineral industry of Kazakhstan produces a large amount of dangerous radioactive materials, certainly, including wastes containing natural radioisotopes. However, there is no comparison between these and the danger stemming from artificial radioisotopes. Their radiation is often fatal to living organisms now existing on Earth, or results in their genetic change. But living organisms, including, of course, human beings, never encountered artificial radioisotopes in the course of their evolution. Thus, contact with them is extremely dangerous for future generations. Therefore, any practice in dealing with radioactive substances, with radioactive waste on a global scale, should provide, first of all, reliable isolation of artificial radioactivity from the biosphere. However, no nuclear project, no stage of the nuclear fuel cycle, not one of the most perfect atomic power stations, not one country of the world, have shown to date the complete isolation of artificial radionuclides from the natural environment. Thus, today, on the Earth, a fatally dangerous experiment connected with the introduction of artificial radioactivity into the natural balance is being conducted. It is an experiment that after several generations may end in the destruction of individual species, or even all life on Earth.
Question: Do you know of any states that import radioactive waste from other countries and bury it on their own territory?

Answer. As far as I know, officially no country of the world accepts another’s radioactive waste for burial on its own territory. Moreover, the legislation of some states categorically forbid not only such imports, but even to raise the question of possible imports. Thus, for example, in the Islamic state of the United Arab Emirates even discussing the possibility of importing radioactive waste is prosecuted by law, and actual import is punishable by the death penalty. The African countries have passed a resolution forbidding the importing of radioactive and chemical wastes on the territory of Africa. Thus, no country of the world, even the most backward African country, imports radioactive materials of foreign manufacture for burial on its own territory. Not even the poorest country in the world! And nothing can prevent the peoples of these countries from opposing such desires by the “powers that be.” We know that any attempt to reconsider such legislation, even in backward countries, will be considered by the world community as the destruction of the international system of environmental protection.
Question: What problems might the Republic of Kazakhstan encounter, if the decision on the import and burial of radioactive waste is nevertheless adopted?

Answer. Raising the question of the importing of foreign radioactive materials and waste into Kazakhstan is, above all, testimony to the absence of political culture in the country’s leadership. Because it is impossible to construct a national economy if you transform the territory of your own state into an international dumping ground for nuclear waste. It is impossible to ensure the reproduction of a healthy population if radioactivity collected from the entire world will be affecting it. It is impossible to become an industrially advanced country if you perform manual labor for the industrially advanced countries. A state that lacks the social and technological base for its own development, but cultivates an attitude of dependence on gifts from others, having sold off its own native land, cannot occupy a worthy place in the system of the international division of labor. And nobody will be able change the image of such country in for centuries on end, because it is enough to stick one leg into radioactive waste, and this radioactive trail will last for many, many generations of the inhabitants of the Earth.
Question: Is the import and burial of radioactive waste on the territory of Kazakhstan only the country’s internal affair?

Answer. If we talk about the Republic of Kazakhstan in particular, its special feature is that it is, above all, a multinational state. The interests of the peoples living on its territory, including their genetic safety, are not enclosed within the borders of one state. They are tied to the fates of the peoples living beyond its limits. Accordingly, if the peoples living on the territory of Kazakhstan will be exposed to risk, particularly as a result of the impact of radiation (which will result in genetic damage), it means that the peoples of the neighboring countries will be exposed to risk. This is the simplest point. In addition, there are many other interrelationships. From the territory of the Republic of Kazakhstan, major rivers flow into the territory of the countries that border it. Contamination of these rivers directly threatens the population living along their banks in other states. Kazakhstan has no outlet to the sea, and the import of radioactive materials is possible only through the territory of neighboring countries. The transportation of radioactive materials is known to be the riskiest part of the nuclear fuel cycle. It is this weak link that attracts the interest of terrorist groups, and people’s fate may depend on the whim of fate alone. Therefore, the neighboring states cannot react quietly to such a statement. In addition, there is also public opinion, which will affect the leaders of the neighboring countries. Let’s put it this way: we in Russia will do our utmost to prevent the transport of radioactive waste to Kazakhstan through the territory of our country. And we will find arguments to convince the public of other states not to permit it either. Our organization, Greenpeace of Russia, and Greenpeace International will do all we can.
Question: Who does the introduction of legislative amendments on the import of radioactive waste benefit, besides Kazatomprom itself?

Answer. First, the revenues will hardly be received by the entire industry. They will be received by individual managers within this sector, and this money will never appear either in the economy of Kazakhstan, or in the economy of any other country. It will be compensation money for the sale of territory. It is black money, which does not bring happiness even to its owners. Second: it’s completely clear that today, when the world stands on the eve of a new technological revolution, counterrevolutions are taking place in industry, including the power industry. The nuclear power sector, which has a premonition of impending doom, is taking optimizing steps worldwide. It is trying to use the international division of labor to find the cheapest niche for its own existence. And this is already reflected, over the decades, in the economy of Kazakhstan. The fact is that the Russian nuclear industry organized an entire campaign for the artificial reduction of the price of uranium mined in Kazakhstan, with the aim of cutting the cost of nuclear fuel. Today, by their estimate, for each kilogram of exported uranium Kazakhstan receives only 50 % of the price that could be currently set.

The primary weak link in nuclear power is the problem of enriched nuclear fuel and the burial of radioactive waste. And here, suddenly, a universal solution has been found. Today, two countries in the world deliver uranium to the global market for fabulously low prices. Due to these contracts, the leadership and upper management of the nuclear industry are fed. Unique conditions are created, under which, by using money obtained from the sale of uranium, it is possible to buy politicians, officials and even public opinion, as has been clearly demonstrated both in Russia and in Kazakhstan. The unprecedented policy of transforming the territory of two great states into international nuclear dumps starts here, with the changes in Russian and Kazakhstani legislation. These are not simple parts of one whole; they are a natural intersection of the interests of the nuclear departments of the two countries, and at the same time, a closed technological chain. Russia will process the enriched nuclear fuel, and the radioactive waste will be delivered to Kazakhstan. The people of the two nations will carry out the dirtiest, most dangerous work for the safe countries: Japan, France, Great Britain and the United States. It is these peoples that the global nuclear establishment has selected for the role of a clean-up crew for their own nuclear needs. And these people have no way to tell their own governments that this should not take place. The people of Russia and Kazakhstan have the right to establish priorities, to create a high-tech economy, and to rescue their own land from the invasion of foreign radioactive waste.

HUMAN RIGHTS OR “BRIGHT” NUCLEAR FUTURE? IT IS YOUR CHOICE!

“NO!” TO THE IMPORT AND BUIRIAL OF FOREIGN RADIOACTIVE WASTE!

NUCLEAR MYTHS AND LEGENDS OF A NON-NUCLEAR POWER