You are here: Home / Human Rights / OIL DEMOCRACY, OR THE STORY OF BEREZOVKA / Sinkholes Appear in and Around the Village of Berezovka Near the Karachaganak Field in Kazakhstan 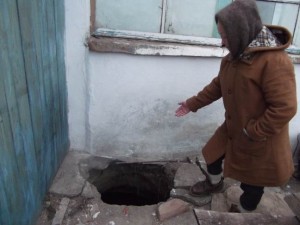 Sinkholes are appearing in and around the village of Berezovka as the ground gives way near the territory of the Karachaganak Oil and Gas Condensate Field in western Kazakhstan. Local residents are concerned that this is could be related to the expanded exploration and drilling of oil and gas condensate at the Karachaganak Field.

After a sinkhole appeared in the village in December 2010, and three others were found in close proximity to Berezovka, at the request of the local villager in whose home the sinkhole occurred, the local environmental organization, Zhasil Dala (Green Steppe), filed a formal complaint with the prosecutors’ offices on the local, regional and national levels.

“It has been a month since the sinkhole appeared, and nothing has been done,” said Nagaisha Demesheva. “I am constantly terrified, and I am afraid for those of us living in the house. I’m also worried about what can happen now since it is winter and parts of my house could just fall into the street.” 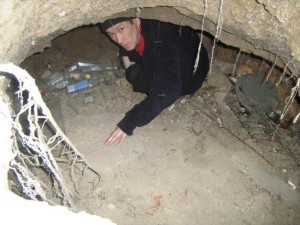 “The failure to conduct the required investigation into the cause of the sinkhole under Demesheva’s home and the inaction of government bodies create a dangerous threat to her family. This is a violation of her rights, which are guaranteed by the Constitution and laws of the Republic of Kazakhstan,” stated Zhasil Dala in its formal statement to the prosecutor. “It is a well-established fact that the formation of sinkholes happens during the development of oil and gas fields.”

Several months ago, two sinkholes appeared approximately 1.5 kilometers south of Berezovka. They are 2.5 meters by 1.5 meters wide; one sinkhole is about 4 meters deep, the other is approximately 5 meters deep. The internal diameter of the sinkholes is around 5 to 6 meters, according to Sergey Solyanik of Crude Accountability, who witnessed the caved-in areas himself. 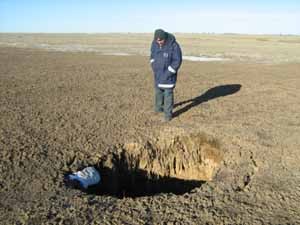 A third sinkhole was recently found inside the Sanitary Protection Zone of the Karachaganak field not far from the village of Zhanatalap. The diameter of this sinkhole is 10 to 12 meters, with a depth of 8 to 9 meters. In this same location are two older sinkholes, which were found by local hunters two years ago. KPO has erected special signs in the area warning local residents that it is dangerous.

“The appearance of the sinkholes in and near the village demands immediate investigation into why they are occurring. It is possible that this is connected with the development at Karachaganak,” said Sergey Solyanik. “The residents of Berezovka are concerned because now, along with the gas emissions from the field, there is a new threat. This demonstrates again the danger to people living close to Karachaganak and the need to relocate the residents of Berezovka as quickly as possible.” 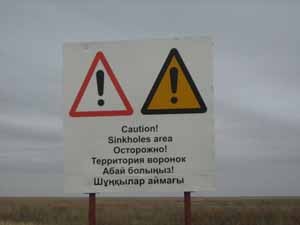 The villagers have been fighting for relocation for the past 8 years, as it is illegal, according to Kazakhstani law, for anyone to live inside the Sanitary Protection Zone.

Waste water is reinjected into the ground at the Karachaganak field, a common practice at oil and gas fields. Researchers have been investigating the potential connection between reinjection and the appearance of sinkholes. One of the most recent and well-known instances of sinkholes damaging communities occurred in 2008 in Daisetta, Texas, when a 600 foot sinkhole emerged in an area where salt domes were used to inject salty waste water from oil and gas operations. (Wall Street Journal, May 18, 2008)

According to the appeal from Zhasil Dala, rumors have begun to circulate among the residents of Berezovka that the village itself will soon fall into a sinkhole. 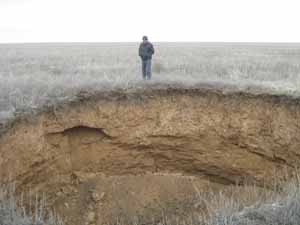 To read Zhasil Dala’s appeal and to learn more about the village of Berezovka’s campaign for relocation, please visit www.crudeaccountability.org.
January 19, 2011

Here is how the national report was preparedCement democracy, or a story of KSMK-3