You are here: Home / Human Rights / Violation of human rights to a healthy and favourable for wellbeing environment in Kazakhstan 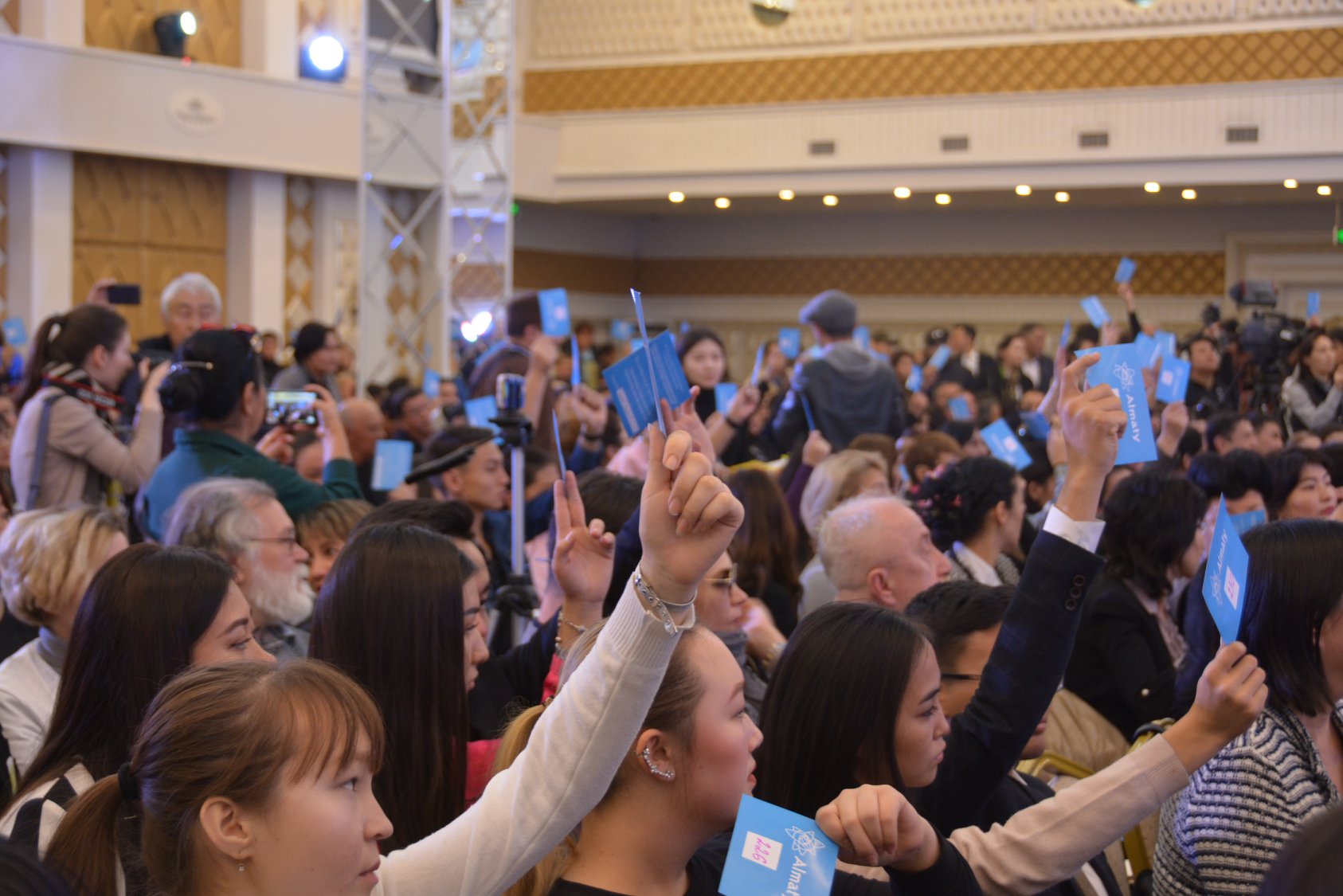 Hundreds of residents of Almaty and other regions of Kazakhstan whose environmental rights have been violated are contacting our organization. We try to help them solve their problems.

Based on our work experience, we prepared the material that gives an idea of the situation with environmental human rights in the country.

Economic policy remains geared towards exploiting rich natural resources. Like the economies of a number of post-Soviet countries, it “depends heavily on fuel exports. So, in 2017 in Azerbaijan, the share of fuel in the total value of exported goods was 90 percent, in Kazakhstan – 63 percent, in Russia – 59 percent, in Turkmenistan – 57 percent.”[4]

The main law, which provides for environmental human rights, is the Environmental Code, adopted in 2007 (hereinafter – the EC).

Article 13 of the Environmental Code recognizes the following rights of individuals:

– right on favourable for their life and health environment; creation of public associations and foundations; to participate in the process of decision-making by state bodies; access to timely, complete and reliable environmental information from government bodies and organizations; to discuss draft regulatory legal acts;

– right to appeal to court for restriction and termination of economic and other activities of individuals and legal entities that have a negative impact on the environment and human health;

– right to appeal to court for compensation for harm caused to health and property.

According to Article 14, public associations have similar rights and in addition:

– right to develop and promote environmental programs, protect the rights and interests of citizens, involve them on a voluntary basis in activist work;

– right to apply to court in defence of the rights, freedoms and legitimate interests of individuals and legal entities, including in the interests of an indefinite number of persons.

According to Article 31 of the 1995 Constitution: “1. The state aims to protect the environment favourable to human life and health.”

According to Article 38: “Citizens of the Republic of Kazakhstan are responsible for preserving the nature and taking care of natural resources.”

In other words, no rights – but there are duties! This looks strange, since subparagraph 1, paragraph 1 of Article 13 of the Environmental Code stipulates that individuals have the right to an environment favourable to their life and health.

Not a single law, including the EC, states that environmental rights are fundamental rights, that is, the rights that “every person has.”

The human rights to water and sanitation are also not recognized.[6] This problem is of particular importance in Kazakhstan.[7]

The EC should recognize the human right to respect for the home in the interpretation developed by the European Court of Human Rights back in 2006: “Breaches of the right to respect for the home are not confined to concrete or physical breaches, such as unauthorised entry into a person’s home, but also include those that are not concrete or physical, such as noise, emissions, smells or other forms of interference.”[8]

The EC does not prescribe a mechanism for public participation in the decision-making process. The Aarhus Convention Implementation Guide states that “the public should have a real practical understanding of the public participation procedures open to them, including various methods in which they may use them effectively and the nature of the results that might be expected from their participation.”[9]

The norm on preliminary hearing of appeals in the Supreme Court is still in place (Article 433). This introduces a great deal of subjectivity into the process of case hearings, since a case is considered not by a panel of judges, but by one judge.

Decisions of bodies of international conventions are not considered to be a basis for reviewing court decisions, rulings and determinations on newly discovered and new circumstances (Article 455).

It should be noted that some norms of national legislation do not comply with the requirements of international conventions.

According to international experts, firstly, the country does not have a “regulation for due account to be taken of the outcomes of public participation in decision-making and the indication of reasons and considerations on which the decision is based as required by Article 6, paragraph 9 of the Aarhus Convention and by Article 6, paragraphs 1 and 2 of the Espoo Convention.” Secondly, state bodies delegate responsibility “for conducting the EIA [Environmental impact assessment] from the public authorities to the developer (initiator) of the proposed activity (Article 6, paragraphs 2, 6, 9 and 10 of the Aarhus Convention refer explicitly to public authorities).”[10]

In Kazakhstan, there is no environmental ombudsman.[12]

Violation of human rights is widespread. “In most cases, government agencies not only do not take action, but openly protect offenders of the law.”[13]

Often, public authorities do not provide the public with “access to all information related to the decision-making process” or misinform the public.

Public hearings in most cases are held formally or not at all.

When considering cases, with rare exceptions, courts do not take into account and, accordingly, do not apply or incorrectly apply the norms of international environmental conventions.

Executive authorities intervene in the activity of the judiciary.

Court decisions made in favour of the public are not implemented for years[14], the judicial enforcement system is highly corrupt. In 2001, the Constitutional Council drew attention to this problem: “Based on citizens’ letters coming to the Constitutional Council, the issue of enforcement of court decisions is topical. About half of decisions of civil courts are “hanging,” not being enforced, which leads to a violation of the constitutional human right to judicial protection, negatively impacts the image of the courts.”[15]

The main causes of massive violations of human rights to a healthy and favourable environment are:

– unsatisfactory legislation and its poor compliance;

– removal of the public from effective participation in the decision-making process;

– interference of the executive branch in the activity of the judiciary;[16]

– collapse of the state system of nature conservation;[17]

– non-compliance with the requirements of international conventions.

The results of the human rights violations are: discrimination of many groups of the population at the place of residence and social status; deterioration of the quality of life; increase of poverty; increase in morbidity and mortality;[18] increased social tension; growing distrust of government bodies.

[1] “The Forest Code was approved in 2003, and has been updated, most recently in 2017. However, there is not yet a national strategic document for the sector for long and medium-term perspective.” State of Forests of the Caucasus and Central Asia. – New York and Geneva, 2019, p. 89: http://www.unece.org/fileadmin/DAM/timber/publications/sp-47-soccaf-en.pdf.

[7] “The problem of water supply is also acute in our country. We do not have enough quality drinking water. A number of regions are in dire need of it. … Presently, we are already faced with a serious issue of usage of water resources of transboundary rivers.”

[12] “There has been an ombudsperson for human rights in Kazakhstan since 2002 but the office has a limited role in protection of citizens’ environmental rights. In 2017, only one of a total of 1,474 complaints received by the ombudsperson for human rights referred to the right to a healthy environment (in 2016, none of the 1,785 complaints did so).”

[14] Effective judicial mechanisms of the Aarhus Convention include a notion which, in particular, “requires that the judgements of the judicial authorities should be ultimately enforceable in society.”

[15] Message of the Constitutional Council of the Republic of Kazakhstan dated March 24, 2001 “On the state of constitutional legality in the republic:” http://ksrk.gov.kz/index.php/solutions/poslanie-parlamentu-respubliki-kazakhstan-o-sostoyanii-konstitucionnoy-zakonnosti-v-0.

[16] “The Human Rights Committee is concerned about the lack of measures to ensure the independence of the judiciary, both in law and in practice. It recommended that Kazakhstan eliminate all forms of unlawful interference of the executive branch in the activities of the judiciary and effectively investigate allegations of such interference, as well as intensify efforts to combat corruption in the judicial system.”

A selection of information on Kazakhstan. Item 21.

[17] “The effectiveness of authorized state bodies in the field of environmental protection and nature management is extremely low. The powers of the Parliament in addressing environmental issues and in the management of state-owned natural resources have been greatly reduced. State bodies have practically eliminated themselves from solving environmental problems. This is the result of excessive decentralization of management, the irrational distribution of powers between the authorized bodies and local executive authorities, numerous reorganizations of the authorized bodies, the lack of effective control mechanisms, and flourishing corruption.”

The state nature conservation apparatus has decomposed to such an extent that it is no longer able to really protect human rights, including the right on healthy environment, and preserve ecological systems.

[18] “In 2013, the World Bank estimated the annual number of premature deaths due to air pollution in Kazakhstan to be 2,800 (caused by particulate matter in ambient air and household air pollution).”

Summary of Lawsuits in 2019 by the Ecological Society Green Salvation*Merry Christmas and Happy New Year!