You are here: Home / News / Consultations on the EBRD project “Green City Action Plan for Almaty City” to be held in spring 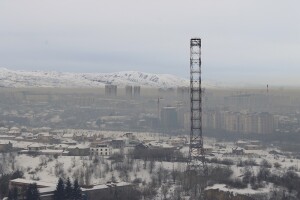 On September 9, 2020, the presentation of the project of the European Bank for Reconstruction and Development “The Green City Action Plan for Almaty City (GCAP)” was held. As part of the work on it, experts will analyze the existing environmental problems of the city and prepare proposals for their solution.

The meeting was attended by representatives of the Bank, Kazakhstani and foreign enterprises, experts and the public. Local authorities were represented by the Green Economy Department of Almaty city. It was announced at the meeting that consultation meetings with the public on certain sections of the GCAP were planned for the near future.

On January 27, 2021, the project manager, in response to a request from the Green Salvation Ecological Society about the timing of the consultations, said: “Given the current non-standard situation with the pandemic, the GCAP project has encountered some delays, so the next consultation workshop with stakeholders is scheduled for early March 2021. … The event will be announced publicly one week before the date of the event.”

According to the Bank, the priority environmental problems of the city are currently being determined based on the pressure-state-response structure. Information is being collected on 7 sectors of the GCAP: land use, water and wastewater, waste, urban planning, energy, industry, transport. The Bank is interested in identifying “reliable sources” of information on these problems.

At the end of 2020, a heated discussion of the General Plan of Almaty with the public took place, which showed that the townspeople had a lot of questions not only to the developers of the Plan, but also to the city authorities. Therefore, the issue of coordination between the specialists of the Bank, Research Institute “Almatygenplan,” the Department of Urban Planning and Urban Studies and the Department of Green Economy of Almaty is of paramount importance.

Without clear coordination, the townspeople will once again receive wonderful, but impracticable projects that carry many reasons for social and environmental conflicts. The city is constantly growing, absorbing fertile agricultural lands, building up river banks, filling the neighborhood with tons of garbage, destroying apple orchards—one of the most famous sights and main values of our region.

The initial report “Green City Action Plan for Almaty City” is posted on the website of the Department of Green Economy of Almaty: https://www.gov.kz/memleket/entities/almaty-eco/press/article/details/36336?lang=ru .