You are here: Home / News / Golden eagle and snow leopard may disappear from the vicinities of Almaty 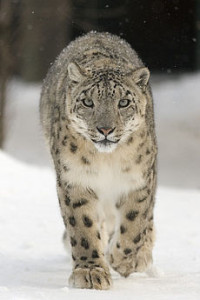 Development of infrastructure for the mountain ski resort on Kok-Jailau will extremely negatively reflect on biodiversity of Ile-Alatau National Park. As a result of the site development and increasing pressure from inflow of tourists, the birds and animals will inevitably be forced out of their habitats.

At the present time, Department of Tourism of the city of Almaty together with “Kokjailau” Ltd. and “CaspiEcology Environmental Services” and other companies develop a project of construction of mountain ski resort “Kokjailau” on the territory of Ile-Alatau National Natural Park. Several territories are considered for development: Kok-Jailau Hollow, area of Big Almaty Lake, Butakovskoe Canyon, and Shymbulak Hollow.

Meanwhile, the project initiators seem to forget that they talk about a specially protected natural territory. This specially protected territory was established by a decision of the government “in order to preserve and restore the unique natural complexes of Zailiskiy Alatau which have a special ecological, historical, scientific, aesthetic, and recreational value.” (Decree of the Government of the Republic of Kazakhstan dated on February 22, 1996, N228, About creation of Ile-Alatau State National Natural Park in Almaty oblast).

Kok-Jailau – is a unique hollow which stretches from east to west, such hollows are particularly known for their rich biodiversity. The territory of the basins of Bolshaya and Malaya Almatinka Rivers is a home for a wild boar, Siberian roe, Siberian mountain goat, badger, marmot, fox, squirrel. Animals listed in the Red Book of Kazakhstan – Turkistan lynx and stone marten – also can be found here.

The national park’s bird population is rich and diverse. Some of these species are rare and some are at the edge of extinction listed in the Red Book of Kazakhstan: ibisbill, bearded vulture, barbary falcon, blue whistling-thrush, golden eagle, and others. 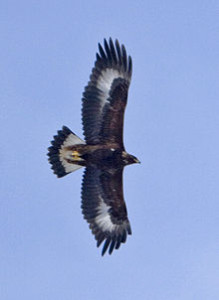 Golden eagle is a symbol of the independent Kazakhstan, one of the most well-known birds of prey with a wingspan of up to 2.5 m. At present, it became a very rare bird in many countries of the world. Golden eagle has a special cultural value in Kazakhstan. It is a part of centuries-old traditions of the Kazakh nation; that is why golden eagle is depicted on the state flag. In Almaty oblast, there about 200 couples of golden eagles. In Big Almaty Lake area, on the territory of approximately 50 sq. km, there is only one couple left (inform.kz)!

Further development of the Big Almaty Lake region up to the space station represents a special threat. This is a key ornithological territory and the most important habitat for endemic birds of the Tien Shan, including white-browed tit-warbler, blue whistling-thrush, black-headed mountain finch. This extremely valuable ornithological cluster may disappear, as a result of the construction. And we will lose one more spot which is popular among bird-lovers from all over the world and tourists-naturalists who consider this place to be a “business card” of Kazakhstan!

Another inhabitant of the park is a snow leopard or ounce, symbol of the city of Almaty. Large predatory mammal from the cat family, it represents a sublime world of the Asian mountains. At the present time, population of these animals is catastrophically low. Hunting area of a single snow leopard is 160 sq. km. In the recent years, its footprints were observed in the upper course of the Maloe Almaty Hollow and in the vicinities of Kumbel mountain.

Golden eagle and snow leopard are listed in the Red Book of Kazakhstan and included in the Red List of Threatened Species of the International Union for Conservation of Nature (iucnredlist.org).

High level of disturbance and inevitable reduction of habitat, as a result of the construction and further operation of the mountain ski resort, will lead to outflow of the animals, deterioration of their living conditions. Specialists warned about it was many times.

Such unique places require careful management and protection from the economic activity of humans!

Social and Ecological Situation in Kazakhstan: Facts and NumbersSummary of Lawsuits in 2013 by the Ecological Society Green Salvation