You are here: Home / News / Appeal to the President of the Republic of Kazakhstan Kasym-Zhomart Tokayev 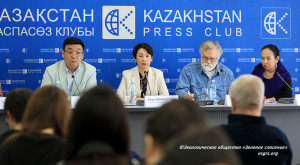 Attn:   President of the Republic of Kazakhstan
Kassym-Zhomart Kemelevich Tokayev

Prime Minister of the Republic of Kazakhstan
Mamin A.U.

Chairman of the Senate of the Parliament of the RK
Nazarbayeva D.N.

Chairman of the Mazhilis of the Parliament of the RK
Nigmatulin N.

Akim of the city of Almaty
Baibek B.

The public campaign in defense of the Kok-Zhailau natural boundary has been going on in Almaty for more than 8 years.

On April 8, 2019, an extended meeting of the Public Council was held in Almaty, during which the Akim (the Mayor) of Almaty City, B. Baibek, proposed to postpone the implementation of the “Kokzhailau” resort for 3-5 years (1).

On the same day, you, Kassym-Zhomart Kemelevich, reported that this decision was made on your recommendation (2).

On April 10, a meeting of the Security Council was held under the chairmanship of the First President of the Republic of Kazakhstan, Elbasy Nursultan Nazarbayev. The meeting addressed issues of socio-economic development of the country and ensuring environmental safety. Commenting on the statements of the speakers at the meeting, Nursultan Abishevich Nazarbayev pointed out the need to ensure proper monitoring of the environmental situation in the regions and prevent violations of legislation in this area (3).

We thank you for recommending the Akim of Almaty to postpone the implementation of the project of “Kokzhailau” mountain resort construction. However, we believe that delaying the project for several years is not a way to solve this important problem.

The main reason why we oppose any capital construction, even in a form of a mountain resort, which was presented to the public at public hearings in the fall of 2018, is that the Kok-Zhailau natural boundary was part of the Ile-Alatau National Natural Park and is currently surrounded by lands of the national park. The baseless transfer of the Kok-Zhailau natural boundary from the category of specially protected natural territories to the category of reserved lands has already led to a significant environmental degradation of the tract and surrounding territories of the national park.

On the territory of the Kok-Zhailau natural boundary, it is planned to create a resort with a total length of ski runs of over 20 km, construct passenger cableways, hotels, restaurants, and other facilities; develop infrastructure – auto road, parking lots, electrical, water and gas pipeline grids. All of this is to be built at public expense, since serious investors are not willing to take the reputational risks of the project, which received so many negative comments from experts and rejection of public even after its “alterations and improvements” in 2018. Reducing the area of forests and biodiversity contradicts the principles of the World Bank’s socio-environmental policy.

Ile-Alatau Park was established in 1996. Its main goal is to preserve the unique ecosystems and landscapes of the Zailiyskiy Alatau. It is the park that provides Almaty citizens with fresh air, drinking water, and is a valuable recreational resource for them. It is vital for the city precisely as a whole natural territory, not destroyed by economic activity. Any ski resort has a significant negative impact on ecosystems – soil and vegetation cover, topography, water sources and atmosphere. The construction of any objects leads to disruption and disappearance of valuable landscapes. And the new resort will be no exception.

Construction and operation of the resort will cause damage to the soil and vegetation cover, and hundreds of Tian-Shan fir trees will have to be cut down.

On the territory of Ile-Alatau National Park there are more than 1,700 species of animals, of which 13 species of birds and 8 species of mammals included in the Red List. Already, the number of animals in the park is declining. The ski resort will not only harm the animal world, but will also prevent its recovery.

In addition, we must not forget that the city has long been experiencing water shortages, and in this part of the park there are many water intakes for the city. The resort’s water supply will require hundreds of thousands of cubic meters of water per year. Currently, there are several springs and small rivers in the natural boundary that are not able to provide the resort with such a volume of water. Meanwhile, this water is necessary for the ecosystem of the national park itself. According to the project’s feasibility study, the area for construction of a water reservoir on the plateau is located on a tectonic fault, which, in the event of an earthquake, poses a great danger to the population of the city. The project carries new risks of geodynamic processes associated with mudflow risk, seismic hazard, and floods.

Construction of a new resort on lands withdrawn from the national park contradicts not only the national legislation on specially protected natural territories, protection of water, forest and land resources, but also international conventions.

Since 1994, the Republic of Kazakhstan has been a party to the Convention on the Protection of the World Cultural and Natural Heritage. In 2002, the Government included Ile-Alatau SNNP in the tentative list of objects of the Republic of Kazakhstan, which are planned to be included in the UNESCO World Heritage List. The transfer of the Kok-Zhailau natural boundary from the category of protected areas to reserved lands, the construction of a new ski resort “Kokzhailau” and the road to it significantly reduces the possibility of including the national park in the List.

In 1994, the Republic of Kazakhstan approved the Convention on Biological Diversity and made commitments to implement it. The construction of a new ski resort “Kokzhailau” and the road to it created the threat of mass destruction of “Red List plants” and their growing areas. That is, the construction will violate the basic requirements of the Convention on Biological Diversity.

That is why we believe that the construction of the new ski resort “Kokzhailau” and the road to it contradicts the requirements of the legislation of the Republic of Kazakhstan and international conventions and is incompatible with the objectives of a specially protected natural area, as well as with the principles of ecotourism development. Restaurants, hotels, cars, use of water for domestic needs and for artificial snowmaking of slopes, cutting down a significant number of trees – all this will lead to a deterioration of the ecological situation in Almaty and will have negative consequences for the citizens’ health.

We draw your attention to the fact that at the moment the Open Letter in defense of the natural boundary has been signed by more than 50 thousand people (6, 7). These are Almaty citizens, citizens of other settlements of Kazakhstan and of other countries of the world who know and love our country. Public outcry is supported by the German Conservation Union – NABU, one of the largest and most authoritative environmental organizations in the world.

The deterioration of the ecological situation, the destruction of the protected natural area of world importance, due to the construction of a “resort”, will nullify the efforts of the First President Nursultan Abishevich Nazarbayev to strengthen the international image of Kazakhstan.

From the point of view of ensuring the interests of society and the state, the conditions for sustainable development of the region, cities and towns of the Almaty region, as well as the functioning of their livelihood systems, which are completely dependent on the state of the natural complexes of the Zailiyskiy Alatau, the preservation of Ile-Alatau National Park without building new resorts seems more profitable and cost effective!

We fully support the development strategy of the green economy, voiced by the First President of the country. We propose to develop eco-tourism, which will not harm the unique ecosystems of Zailiyskiy Alatau.

In connection with the above, we ask you, Kassym-Zhomart Kemelevich, to take measures:

– to completely abandon plans for the construction of “Kokzhailau” mountain resort;

– to return the Kok-Zhailau natural boundary to the Ile-Alatau National Park and ensure its protection in accordance with the legislation;

– to strengthen and bring the environmental legislation of the Republic of Kazakhstan in line with the requirements of international conventions;

– to put an end to the interference of local authorities in the activities of national parks.