You are here: Home / News / It is still a long way to the final termination of the construction of the mountain ski resort on Kok-Zhailau! 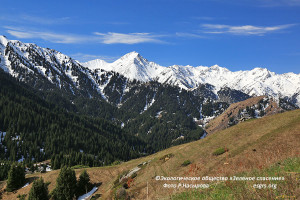 An important event marked the history of the public campaign “Protect Kok Zhailau”.

On October 29, the President of Kazakhstan Kassym-Zhomart Tokayev banned construction of the resort on the territory of the Kok-Zhailau valley. He stated this at a meeting on socio-economic development of Almaty. “In order not to return to this question every time, today I ban working on this project. That is, the construction of the ski resort on Kok-Zhailau. We don’t need it,” Kasym-Zhomart Tokayev said. “Moreover, all professional environmentalists and competent public are against it.”

Journalists and many activists believe that this is “the end of this matter”. Certainly, this is an important step in preserving the natural valley and the entire Ile-Alatau National Park. However, the final resolution of the issue is still a long way off.

Recall that in April 2019, the President already expressed his opinion on the project. Baurzhan Baibek (at that time akim of Almaty) proposed postponing the Kok-Zhailau ski resort project to study expert assessments and opinions of city residents. And the head of the country supported this decision, and even elaborated that it was adopted by his recommendation. Despite these statements, construction of a power substation in the natural valley continued. Construction of a new service road was started in the mountains.

We welcome the declaration of the head of the country, but there is a number of specific measures that must be taken, in order to implement it.

First, in 2014, by the Government Decree No. 1267, 1002 hectares of the Kok-Zhailau valley lost their status of specially protected lands (were removed from the Ile-Alatau National Park) and transferred to the “category of reserved lands of the Medeu district of Almaty for construction and operation of the ski resort “Kokzhailau».

And in fact, the akimat can utilize the land at its discretion. Construction of the resort is prohibited. But they can build something else! Therefore, first it is necessary to cancel the Government Decree No. 1267 and return the natural valley to the Ile-Alatau National Park! The Ministry of Ecology, Geology, and Natural Resources of the Republic of Kazakhstan is ready to “initiate a draft resolution on returning the natural valley “Kokzhailau” to the national park”! This was stated by Vice-Minister Yerlan Nysanbayev in response to the request of the Ecological Society “Green Salvation” (see letter No. 30-01-13-03/Z-K-89 of September 19, 2019).

Second, the construction of the resort was included in the State program of development of tourism industry of the Republic of Kazakhstan for the years 2019-2025, which was approved by the Decree of the Government of the Republic of Kazakhstan dated on May 31, 2019, No. 360. In accordance with this program, the construction of the resort and the connecting road is planned for the years 2020-2023. In order to completely terminate the construction of the mountain ski-resort, it is necessary to introduce an amendment to the Government Decree and to cancel paragraph 16 in the Attachment 2, and paragraphs 302, 324, and 439 in the Attachment 3, that mention the resort.

Third, it is necessary to cancel the Resolution of the Akimat of Almaty dated September 25, 2018, No. 3/323-2459 “on granting the right of temporary gratuitous short-term land use on the land plot in Medeu district to the Municipal state institution “Department of tourism and external relations of Almaty” for construction of the resort and other resolutions about the natural valley.

Fourth. It is necessary to solve the issue with the power substation, which construction was fully finished in summer of 2019. The substation must be dismantled safely and with minimal harm, and the land at the construction site needs to be remediated!

Fifth. It is necessary to remediate the territory along which the new service road passes – along the ridge from the Nurlytau micro district (from the former Enbek ski base (CSKA)). It is necessary to completely stop motor traffic along the Kok-Zhailau natural valley and dismantle the concrete slabs.

Only after implementation of all the measures listed above, it will be possible to say that construction of the mountain ski-resort is discontinued, and the damage done to nature is partially compensated.
The Ecological Society sent new letters to government bodies to clarify all these issues.

P.S.
According to the Press Secretary of the President, he received a letter from the UN Deputy Secretary-General, Executive Secretary of the UN Economic Commission for Europe, who welcomes the introduction of a ban on construction of the ski resort in the Kok-Zhailau natural valley.

Is it possible to plant and grow a million trees in Almaty?Thousands of seedlings of Sievers apple trees and tulips of “Nursultan Nazarbayev” variety are abandoned on Kok-Tobe