You are here: Home / News / Is it possible to plant and grow a million trees in Almaty? 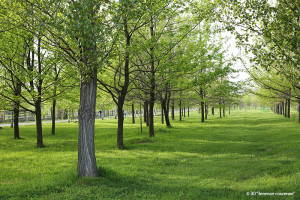 At a gala meeting dedicated to the Constitution Day, the akim of Almaty Bakytzhan Sagintayev said: “We need to seriously renew the “lungs” of the city. There are about 2 million trees in the city, but about 500 thousand are in emergency conditions or are sick. Therefore, I propose that in the fall we begin implementation of the three-year Jasyl Almaty project and plant, at least, a million new trees.”[1].
We asked ourselves a question: is it possible to accomplish that, taking into account our reality? And we tried to find the answer.

Lack of information is a profitable business

So, how many trees are there in the city, where do they grow and in what conditions? Many people would say that it is a very vague question. Most importantly is that the trees are not chopped right and left. But this is not exactly true. In the developed countries, you will be given a comprehensive report, because there the trees are not only counted but also accounted for their benefits. 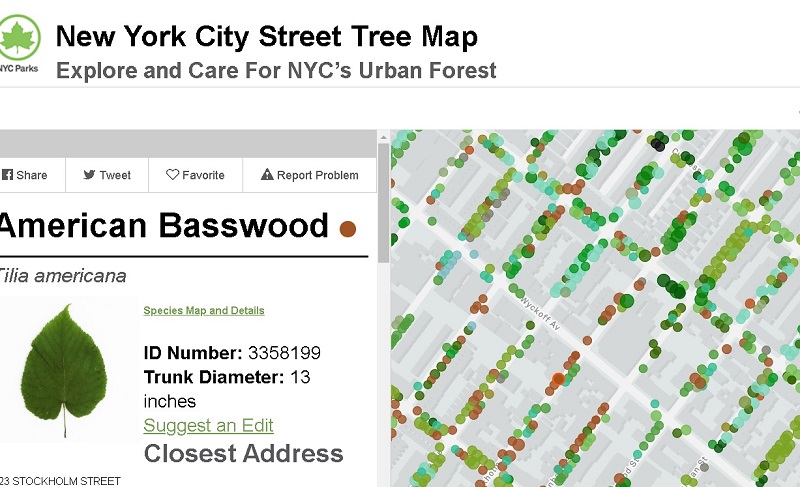 In Paris, Berlin, Vienna, there are special informational services. Each tree has its number and electronic code. This allows to receive information about it through the Internet.

In New York, one can instantly find out about the tree they are interested in.[2] For example, 253,698 trees are marked on the map in Queens. The tree under identification number 4659220 is a swamp oak. Its “address”, diameter of the trunk, and photos are all included! The most interesting thing is that the information includes environmental benefits provided by the tree, calculated in monetary terms. This amount is equal to $345 per year, including $40 for absorbing flood waters, $20 for purification of atmospheric air, $238 for energy savings, in particular it creates a shadow and thereby reduces the usage of air conditioning.

Has any of our officials come up with the idea of calculating the benefits of the trees, and not just the budget costs for their planting, transplanting, pruning and cutting? 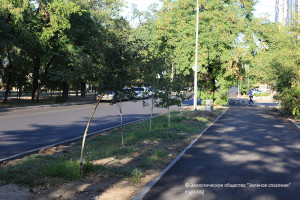 The city authorities have repeatedly promised to create a similar map for Almaty. Tree inventory was conducted, developers were involved. In paragraph 22 of the new “Rules for the maintenance and protection of green vegetation of the city of Almaty” in 2018, it is stated that the catalogue of green vegetation is created for:

“1) obtaining reliable comprehensive data on the number and condition of green vegetation in the city of Almaty;

2) monitoring the status and number of green vegetation in the city of Almaty;

3) identifying the main directions of the municipal policy in the field of protection, conservation, and development of green areas of the city of Almaty;

5) providing the population, state bodies with reliable information about the number and condition of green spaces in the city of Almaty.”

The question on how often it is necessary to update information in the catalogue was also discussed, but … alas, the catalogue hasn’t still been put together[3]. Probably, in the conditions of the rapid destruction of the green fund, it is simply physically impossible and economically unprofitable to spend money on this.

Rules on maintaining green vegetation, or Game without rules 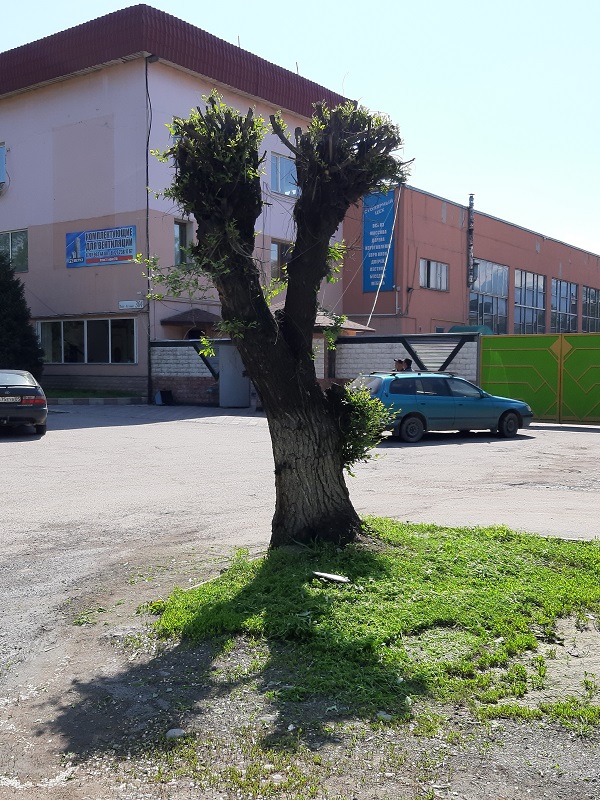 So, what do the new Rules represent?

The procedure for compensatory planting in paragraph 35 is poorly spelled out. The size of demolished plantings, their age and sanitary functions carried out by them are not considered. A typical situation develops as follows: a large tree with a large green mass is being cut down, and instead, five tiny seedlings on which you can count all the leaves are planted.

Nothing is mentioned about liabilities and compensatory plantings in cases of illegal cuttings, i.e., when a cutting occurs without a permit of an authorized body.

The point of sanitary pruning and cutting is described very vaguely. Paragraph 27 states that in case of a threat of an emergency situation, sanitary cutting is carried out without coordination with an authorized body. Such cutting can cause conflict with local residents, who, due to the numerous cases of illegal cuttings, lose trust in state authorities and react oversensitivity to any manipulations with green vegetation.

There are no clear instructions for builders to take measures to preserve plants at the construction site, and especially in the surrounding area. 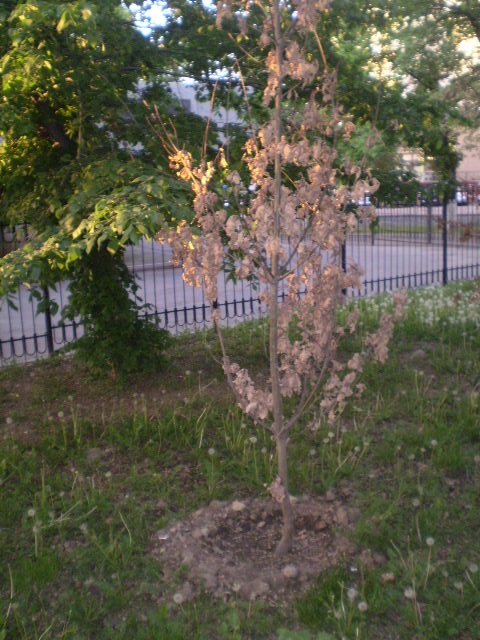 Paragraph 39 of the Rules is simply confusing. It says: “Cutting down trees of historical or unique aesthetic value, species of trees and shrubs included in the Red List is prohibited.” Does this rule apply to all land plots? Or private owners can ignore this rule? No answer!

And finally, planting techniques, pruning, and maintenance deserve a lot of criticism. It is necessary to develop guidelines for establishing and monitoring of green spaces. There used to be such an instruction, but it was cancelled back in 2011 for unclear reasons. And as a result – a game without rules!

Finally, absence of a centralized authority responsible for maintenance of green spaces does not allow for effective monitoring and management of the city’s green fund. 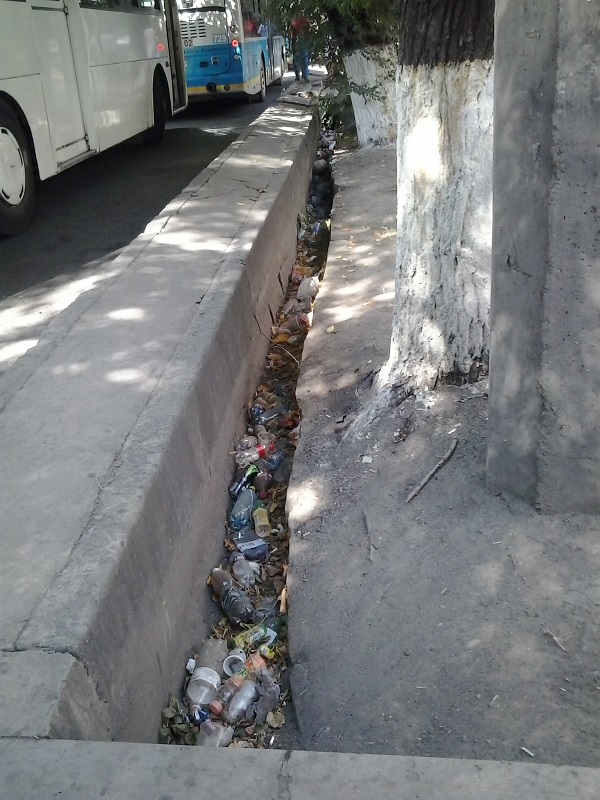 Why about 500 thousand trees in the city are in emergency conditions or are sick? It is easier to answer the question: why are there so few of them?

Firstly, trees and shrubs die by thousands from droughts, even if they grow within few meters of rivers, ponds and irrigation ditches. Same is true for the downtown area. Why? Because there is not everywhere and not always water flowing along the irrigation ditches. Because many banks of rivers and ponds are covered with concrete. For example, in the Central Park, hundred-year-old oaks dried out within ten meters of the lake. Meanwhile, water flows in abundance through the park’s storm water collection pipes which don’t have any irrigation openings, and discharge back to Malaya Almatinka river. Trees dry out on the streets of Panfilov, Baiseitova, Gogol and many others. Empty irrigation ditches turn into garbage collectors. By the way, during installation of these ditches, roots of the trees are mercilessly cut, and not every tree can survive such a procedure. The expensive irrigation systems installed on Abay and Gagarin avenues and in some city parks either do not work or have been ineffective.

Secondly, hundreds, maybe even thousands of trees, do not have open space around the base of their trunks. The space around the trunks is either filled with concrete or paved. As if they had to deal with the Italian mafia. Even rain cannot help these trees. Most of them die, and only a few miraculously survive. If we add the insanity of covering everything with asphalt and pavers, filling river banks with concrete, and trampling lawns, the percentage of trees that are close to death is significantly increasing. 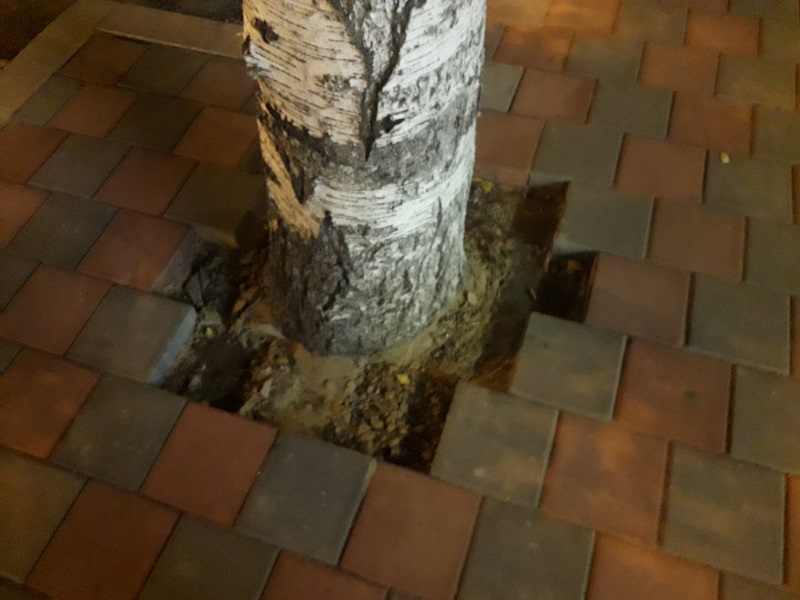 Thirdly, it is well known that without water, trees weaken and become more vulnerable to pests and diseases. Local parasites are joined by “imported” ones, which come to us in a variety of ways.

In the last 5 years, new pests have appeared: “Oak mining sawfly (Profenusapygmaea Kl.), Elm mining sawfly (FenusaulmiSand), Ohrid miner, or chestnut mining moth (Camerariaohridella Desh. et Dim.), Marble bug (Halyomorphahalys Stål.), bark beetles, barbels. In a short time, they became noticeable pests of oak, chestnut, small-leaved elm and catalpa”[4]. It is not easy to get rid of these foreigners, as evidenced by the situation in Bishkek[5].

But this does not bother us: the amount of transport is constantly increasing; industrial enterprises, which have no place in the city, do their dirty work; the endless reconstruction of sidewalks, roads, yards, river banks raises tons of dust into the air, not to mention the exhaust gases emitted by construction equipment. 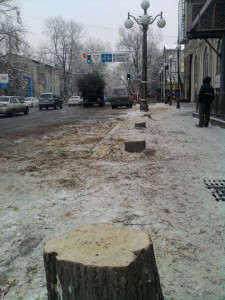 Point and compacted development against trees

Under the windows, there used to be a day-care. Oaks, spruces, maples, flower beds and a fountain. The day-care was closed and privatized, like dozens of others. All the trees got cut down. Only one chestnut was left. The construction is going on for more than ten years now. Nobody knows when it is going to end.

This is a typical situation in the city and its suburbs. Point developers made their way into green zones, squares, and even into the lands of national parks. This is explained by the fact that green spaces are easier to demolish than dilapidated housing, and no one needs to be relocated. And compensatory plantings are sort of a payment for the received plot of land. They do not always make up for the lost green fund, and many trees die without care and watering, even in downtown. Point and compacted development requires territories, therefore it sweeps away all life from the face of the earth.

Another reason for dying green spaces is dubious projects of landscaping and improvement of urban areas. Special concepts, business plans, and scientific justifications are developed for this.

Here is a striking example. In 2017, 16 million tenge were spent on purchasing trees from Germany. They were planted on Panfilov street and… many of them died. The city akimat staff explained the reason for the occurred incident. “The wilting was due to climatic conditions and sudden changes in pressure, as well as neglect on the part of the population.” “It was also noted that henceforth, when planting new trees, climatic conditions will be taken into account.”[7]

Apparently, the akimat did not realize that we have a climate different from Germany. Moreover, trees suffering from “hypertension” were brought! Well, it seems that no one had ever heard that it is better to plant plants that are native to a given area.

So, to summarize. Is it possible to plant and grow a million trees in Almaty?

You can plant! You can’t grow! It is impossible until legal issues are resolved; until the project is handed over to specialists; while the ecological awareness of the population remains at a low level; while corrupt officials like woodworms erode the budget and the green fund of Almaty.

[1] To plant one million trees in Almaty was proposed by Bakytzhan Sagintayev: https://www.inform.kz/ru/posadit-million-derev-ev-v-almaty-predlozhil-bakytzhan-sagintaev_a3560846, (website visited on September 3, 2019).

[3] Green million. Vecherny Almaty, August 22, 2019. ”To the concern of the social activist, we should add that the green spaces zoning map still has not been approved by the advisory committee of the Department of Green Economy”: http://vecher.kz/incity/zeljonyj-million, (website visited on September 5, 2019).

[4] Reply of the Department of Green Economy of the city of Almaty dated on July 5, 2019, to the inquiry of the Ecological Society ”Green Salvation” dated on June 25, 2019.

[6] Effects of pollution on plants: http://landscape.totalarch.com/influence_contamination_plants, (website visited on September 5, 2019).

[7] Almaty Akimat explained why the 16-mln-tenge-trees on Arbat withered away: https://www.zakon.kz/4981351-v-akimate-almaty-rasskazali-pochemu-na.html, (website visited on September 5, 2019).

Merry Christmas and Happy New Year!It is still a long way to the final termination of the construction of the mountain ski resort on Kok-Zhailau!

With Christmas Greetings and all Good Wishes for the New Year!