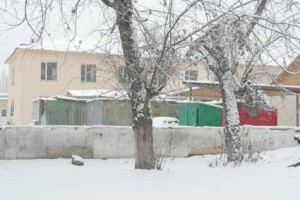 The Ecological Society “Green Salvation” was addressed by a group of citizens living in the city of Almaty on Raiymbek street. The people were concerned that their rights on favorable environment were violated because of construction of a State veterinary laboratory (contractor – “Almatyenergoresurs” LLP) which was taking place on the territory of their private land lots next to their houses.

The construction works started in July 2009. We conducted a relevant inspection and determined the following:

1. According to the standard design, the complex includes a laboratory building, vivarium, and crematorium. The site’s primary purpose is to “diagnose extremely dangerous diseases of animals listed and approved by the Government of the Republic of Kazakhstan”, including the diseases which can be transmitted to humans (anthrax, murrain, brucellosis, rabies, and others). The research is to be performed for the whole Almaty oblast (region) and the city of Almaty. The crematorium is to burn the corpses and tissues of dead animals. Existing standards require such enterprises to have a sanitary protection zone (Sanitary Rules and Norms 8.01.001.04), at a minimum, of 50 meters from the constructed site.

2. The laboratory site construction works are conducted in an immediate proximity of the residential houses, at a distance of 5 meters. This fact was documented.

3. The project of the construction is not agreed with the local residents. There is no any evidence of accounting the public opinion or conducting of public hearings, in compliance with the requirements of the legislation on architectural and construction activities.

4. There are no documents proving that the public opinion was accounted, nor that the public had an opportunity to participate in the decision-making process related to the site development, which violates the Environmental Code of the Republic of Kazakhstan.

5. There is no conclusion of the state environmental assessment on the project of the veterinary laboratory construction, which is also a violation of the Environmental Code.

6. In violation of the indicated legislation, the initiator of the construction works did not even inform the people whose interests were directly affected by the intended activity, did not involve the public into discussion about the planned activity, did not consider the public opinion, which is a violation of the principle of publicity of the environmental assessment.

7. The project of construction of the veterinary laboratory is not approved by the official authorities, which violates the Law «On Architectural, Urban Planning and Construction Activities in the Republic of Kazakhstan»

8. The development works are conducted with severe violations of the construction, sanitary, and environmental norms. The Department of the State Architectural and Civil Engineering Control does not supervise the construction.

9. Lack of the required sanitary and protection zone already causes a significant damage to the property of the local residents. Access to the people’s houses is blocked which makes it impossible for them to use their cars. In order to get home, the people have to pass the construction site. At the present time, the site is being developed by heavy vehicles, which is associated with a constant noise, spreading dirt, and dust dispersing over the yards of the claimants and over the neighboring streets.

10. All these violations are excused by a necessity to undertake measures for organizing a system of sanitary and epidemiological well-being of the population, veterinary medicine and plants quarantine, in compliance with the agreement signed with the World Trade Organization about application of the sanitary and phyto-sanitary measures.

Cement democracy, or a story of KSMK-3A lawsuit about the government inactivity. Court on-site hearings in Berezovka village